I love the UK. There, I said it. After a year of living in a place where I couldn’t understand the language, stepping into another where suddenly everything makes sense really makes you feel you don’t want to leave. Ever. My journey began by arriving at the Birmingham airport. I flew with Ryanair, the UK equivalent of AirAsia. We landed, literally, with a thud. I seriously thought the wheels were going to break through the plane. But apart from that, this budget airline was on time, so no complaints in that department.

14-Nov: I was greeted by friends whom I met back in Kajang (they were students then). It was great to see the trio after all these while.

From left: Maya, Peter and Derek (my hosts for the trip)

First stop was the city of Birmingham, the 2nd largest city in England after London. There, we went to a Malaysian restaurant (where else) and I must say:

a. They serve wicked teh tarik (I had two)

b. Their roasted duck, pork belly and char siew rice was awesome

c. Their char kuey teow was approved by my Penang friend. Maya, btw, is a Japanese girl who lives in Penang and speaks perfect Hokkien. I think she is more Malaysian than Japanese.

The food was so good I forgot to take pictures. Oh well… After stuffing ourselves silly, we head over to Oldham. There we stayed at the Travel Lodge, something like your Tunes hotels, with a bit more extras offered. The room we had came with a double bed and a sofa bed. You can sleep 4 persons in there. 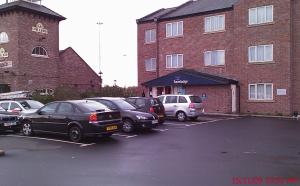 The place itself is nothing glam; to be expected from the price you pay for the rooms. You step into a very immaculate lobby, simply designed as it is, check yourself in and off you go to the room. That was day 1.

15-Nov: Big day for Peter, Derek and myself, as finally we will be going to dream land of every Manchester United fan, OLD TRAFFORD. But first, we head to Manchester China Town.

The Grand Arch of Entrance

First stop was to have dim sum at the Pacific Restaurant. I found out breakfast in UK doesn’t start until 11am, which made me kinda suffer cos’ the moment I awaken from slumber, the first thing my tummy would do is growl. And having breakfast which is really brunch kicked up a really good appetite. It was a very cosy restaurant, and we were the first customers to arrive. Talk about being hungry. By 12pm, the place was packed to the brim. The waitress that served us, we found out, was from Penang who have been living there for 7 years. And as usual, the food was gone before any one of us could snap any pix.

Beneath the smile hides a rumbling stomach

After lunch, we head to the THEATER OF DREAMS. I’ll let the pictures do the talking… 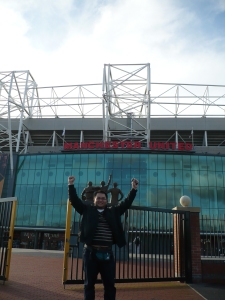 After 10 years of supporting them, I have reached Manchester United Football Stadium

We went first to the Mega Store and I purchased a few paraphernalia, in the hope of converting my wife and kids to being Manchester United fans as well. Time will tell ;P. We also purchase the tour tickets at 12.50pounds a piece.

Inside Old Trafford. Sometimes, you can see the tour guide on the telly (he works as a steward on match days)

The Munich Tunnel, a memorial for the players and journalists whose lives were lost in the 1958 air crash...

Before the tragedy at Munich the club belonged to Manchester. But afterwards, Manchester United captured the imagination of the entire world.

It was an emotional trudge through the tunnel, remembering the lives lost, shattered dreams, the mammoth efforts to rebuild the club…

The tactics board, and the place where Fergie unleashes the famous 'hair-dryer' treatment

The tunnel to the grounds

Some of you may recognize this, the pre and post match interview board

Totally excited, as you can see 😉 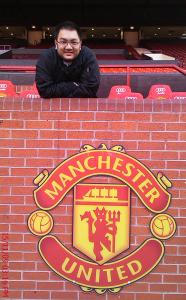 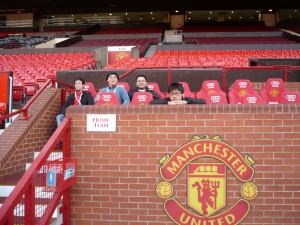 After the tour that took about an hour, we continued with a visit to the museum… 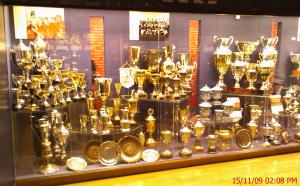 The trophy cabinet... it's not even half of what they have 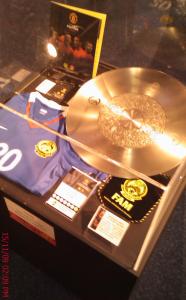 These are memories that will be forever etched in my heart…

After the highly satisfying trip, we headed over to Trafford Place, a massive shopping mall in Manchester for dinner before heading over to Nottingham, the place where Derek is staying.

To be continued (mainly because I feel that after the Man U trip, talking about anything else seems insignificant)…

our current plan, now confirmed, is to return to Brats after CNY ’10. Ayl will come back to Kch on CNY day itself and after 2weeks, we’ll be going to KLIA and off to freezing-winter Brats we go. can’t imagine how the 2 kids will be going from such a hot weather (30*C+) to a freezing one (-10*C n below).

meantime, i’ll still be here in Kch at the in-laws’… now with 2, moving/going around will be difficult since i don’t have a faithful companion who can help me take care of an active running-around lil girl while i have my hands full carrying baby.

coz of this, i won’t be able to go back to Penang… SAD!! 😦 but i’m still hopeful that maybe something will come up and i’ll get to go back maybe for just one day to attend my beloved cousin’s ROM in Dec.

His Grace is sufficient for me.

it’s going to be 2weeks now since Ashton’s born and he’s nothing like his older sister! Arielle was an easy baby… an angel, she hardly ever cried even when she’s hungry. Ashton however cries very very VERY loudly when he’s hungry, especially when he’s hungry and not getting his milk. this time i’ve chosen to breastfeed baby fully and so far it’s proven to be quite a challenge for me.

some days are good when he’s latching on properly, other nights are horrible when he cries and cries and forgets how to latch and that made me panic and frustrated as well. with sleepless nights and body aches, he’s being a big bully when he doesn’t stop crying (to put it nicely). every time i feel like losing it, i look up to God and ask for H.E.L.P.!!! short simple prayers get answered all the time, and i’m so grateful i’m still able to sit and find time to blog about this, otherwise i think i would have already gone crazy pengsan (fainted)!!

this is an old song; heard it in one of Passion’s live concert album that’s in my pc and it captured me immediately. it’s simple yet comforting. i found the vid from YouTube and cried after watching it. So great is God’s love for us. Thank You God for Your faithfulness and Your grace.

Finally! baby’s out and now he’s sleeping soundly in his crib. i delivered on 26/Oct; 8.37pm to be exact after only 5hrs of labour. i’m proud to say, there was totally no use of any painkillers during labour (i had some kind of ‘laughing gas’ when i was in labour with Arielle)  and was a natural birth. what? of course there is pain!!

my water broke in the morning at 10am, but there was still no sign of contraction at all. i feel so comfortable that i thought my prayers for a painless delivery is really coming true!! haha… well, no such thing after i was checked and then induced. contractions came 2hrs after that and then 5hrs later, this little man came into the world crying very loudly. 🙂

delivering here in Kuching GH, i cannot help to but to compare the vast difference with Putrajaya’s semi private hospital where i delivered Arielle. the facility, the staff, and especially the service (!!) are so much better – people here are more friendly and they’re not so racist. no doubt the service if compared to private hospitals is under the benchmark because the you don’t get the special attention that you pay so much for, but overall, Kuching GH has preceded my expectations of a local government hospital.

Post Natal – i was discharged the next day at 2pm, with a fee of RM50 for hospital bills (everything even food) and a compulsory ‘gift offering’ of (3packets x 10pcs) Kotex Loop Sanitary napkins. then home we go!

the day after (27th), we had to go to the clinic again (the one i went for checkups) to report on the delivery of baby and then checkup for baby and mother. the nurses were thorough. they check blood pressure & heart rate, check your breasts and they encourage you to breastfeed, they check the contraction of the uterus; is it returning to normal, even check ‘down under’ to see if you’re healing properly. yes, i’ve got stitches, not a long cut like the 1st delivery but a 1st degree tear instead. again… pain is inevitable. we can put the blame all on Eve. 😉 i’m thanking God for His strength and His grace. this time around i’m much more cheerful; i believe i was more than slightly depressed after my 1st delivery due to the 12hrs labour, all the poking and prodding and scolding and mistreatment  i got from the hosp, would have gone insane if it had gone any longer.

so, i’m currently one-hand nursing and one-hand blogging – my goal is to fully breastfeed baby for at the least 6months; he’s still learning how to latch on, and i’m also learning the ways and tips of nursing; what’s best and what’s not with many thanks  to Leona and my MIL. baby’s routine now is to feed, sleep and poo… if only he’d do it all in sequence! the thing is, he’ll wake up to feed, falls asleep 5mins later while being nursed (sometimes poo also) so i’ll put him in bed, but he gets up 3mins later and cries for milk cos he’s still hungry. so it’s latch on and off for nearly 2hours, sometimes in the wee morning. it’d be a great relief if he already knows how to latch on properly. no wonder why most prefer to just give formula milk – so much easier cos baby sleeps immediately after the bottle and they can sleep for hours before the next feed. i found a good site though for those learning how to breastfeed like me.

…and he shall be called Ashton Tavy Leong Xuen En. following my brother’s kids Ashley & Asher, Ash carries the Hebrew meaning of happy/blessed. the middle name Tavy is from Ayl’s middle name; and the chinese name literally translates to ‘proclaiming’ ‘grace/glory’.

or should we just name him Ash instead… hmmm, what do you think?